May 22, International Day for Biological Diversity 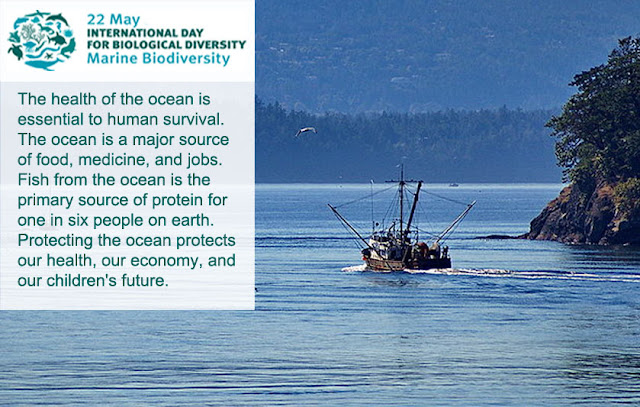 The United Nations proclaimed May 22 The International Day for Biological Diversity (IDB).

The theme has been chosen to coincide with the observance of 2017 as the International Year of Sustainable Tourism for Development as proclaimed by the United Nations General Assembly in its Resolution 70/193 and for which the United Nations World Tourism Organization is providing leadership.

Biodiversity, at the level of species and ecosystems, provides an important foundation for many aspects of tourism. Recognition of the great importance to tourism economies of attractive landscapes and a rich biodiversity underpins the political and economic case for biodiversity conservation. Many issues addressed under the Convention on Biological Diversity directly affect the tourism sector. A well-managed tourist sector can contribute significantly to reducing threats to, and maintain or increase, key wildlife populations and biodiversity values through tourism revenue.
For many coastal communities, the survival of marine and coastal ecosystems and biodiversity is essential to their nutritional, spiritual, societal and religious well-being. But even for the many millions of people who may not think that they have any strong reliance on the ocean, marine ecosystems and wildlife provide all kinds of benefits. Many coastal environments provide protection for those farther inland from the ravages of the sea. Coral reefs buffer land from waves and storms and prevent beach erosion. Dune systems on beaches stabilize shorelines from erosion and encroachment. Mangroves, mudflats and deltas trap sediment, preventing the land behind it from sliding ever-seaward.

The ocean world is in all our daily lives. For example, sponges from the Mediterranean have been used for painting, cooking, cleaning and even contraception for at least 5,000 years. Substances derived from seaweeds stabilize and thicken creams, sauces, and pastes, are mixed into paint and used to make paper and even in skin lotion and toothpaste.

Many marine plants and animals also contain a multitude of substances already being used, or identified as being of potential use, in medicines. Each of the 700 known species of cone snail produces a unique cocktail of 100 to 200 toxins, some of which have already been developed into pain killers: one, which has been on the market since 2004, is more than 100 times more powerful than morphine. A 2010 study predicted the existence of between 250,000 and close to 600,000 chemicals in the marine environment, approximately 92 percent of which remained undiscovered; those chemicals, the study’s authors estimated, might yield up to 214 new anti-cancer drugs, worth anywhere from US $563 billion to $5.69 trillion.


Most importantly of all, tiny marine plants called phytoplankton produce energy, like plants on land, through photosynthesis. As a result of that photosynthesis, they release oxygen. In fact, phytoplankton release half of all oxygen in the atmosphere. 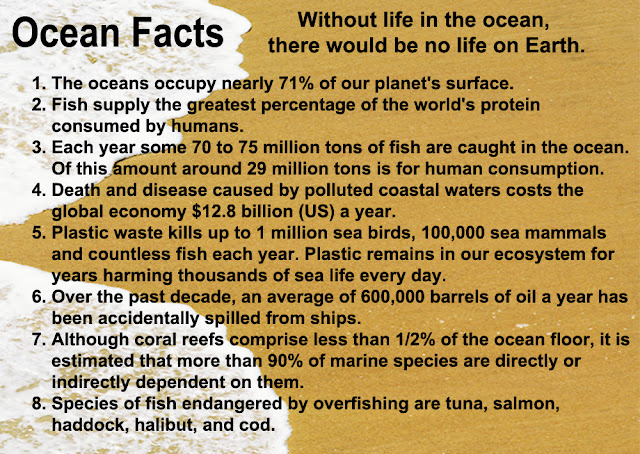 Resources.
The International Day for Biological Diversity
Ocean Conservancy
The Ocean Foundation
Save the Sea

With diet-related diseases rising at an alarming rate, it has never been more important to educate children about food, where it comes from and how it affects their bodies.

It’s about celebrating the importance of cooking good food from scratch and raising awareness of how it impacts our health and happiness – we believe that everyone should know about food and it starts with getting kids food smart, making cooking fun and inspiring a love of food that will last a lifetime. Food Revolution Day is a campaign by the Jamie Oliver Food Foundation in the UK and USA, and The Good Foundation in Australia.


Who is taking part?
Food Revolution Day is open to anybody, whether you’re a school, organisation or individual.

Many activities are organised by supporters in their local area or voluntary Food Revolution ambassadors who champion food knowledge and cooking skills in their communities.

Why have a day of action?
Learning about food and how to cook from scratch is one of the most valuable skills a child can ever learn.

This knowledge used to be passed down from generation to generation, but now, with an over reliance on unhealthy convenience foods, millions of people lack the confidence and even the most basic skills to cook for themselves and their families. By educating children about food in a fun and engaging way, we’re equipping them and future generations with the skills they need to live healthier lives.
Posted by Dr. Sandra Frank at 1:47 PM

May, National Bicycle Month, sponsored by the League of American Bicyclists.

Mission.  To promote bicycling for fun, fitness and transportation and work through advocacy and education for a bicycle-friendly America.

History. The League was founded as the League of American Wheelmen in 1880. Bicyclists, known then as "wheelmen", were challenged by rutted roads of gravel and dirt and faced antagonism from horsemen, wagon drivers, and pedestrians.

In an effort to improve riding conditions, more than 100,000 cyclists from across the United States joined the League to advocate for paved roads. The success of the League in its first advocacy efforts ultimately led to our national highway system.

Benefits of Bike Riding
People ride bicycles for all sorts of reasons, from better health, to saving money on fuel, and helping the environment. In addition, bike riding is a lot of fun.


Bike Safety - Introduction to Bike Safety
and Sharing the Road

The League provides education for cyclists, including bicycle safety.To learn more about the League of American Bicyclists, visit their website at http://www.bikeleague.org.
Posted by Dr. Sandra Frank at 11:26 AM