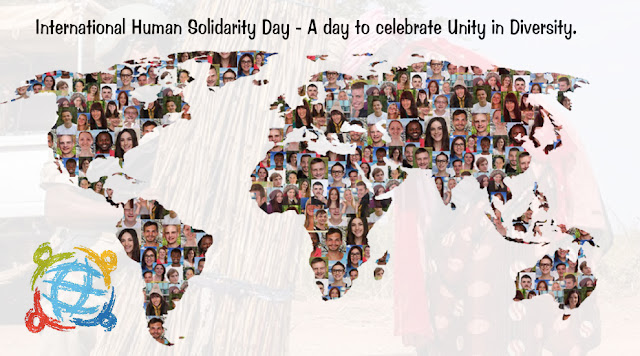 The UN General Assembly convinced that the promotion of the culture of solidarity and the spirit of sharing is important for combating poverty, proclaimed 20 of December as International Human Solidarity Day.

Through initiatives such as the establishment of the World Solidarity Fund to eradicate poverty and the proclamation of International Human Solidarity Day, the concept of solidarity was promoted as crucial in the fight against poverty and in the involvement of all relevant stakeholders.


The UN and the Concept of Solidarity
The concept of solidarity has defined the work of the United Nations since the birth of the Organization. The creation of the United Nations drew the peoples and nations of the world together to promote peace, human rights, and social and economic development. The organization was founded on a basic premise of unity and harmony among its members expressed in the concept of collective security that relies on the solidarity of its members to unite “to maintain international peace and security”.

It is in the spirit of solidarity that the organization relies on “cooperation in solving international problems of an economic, social, cultural or humanitarian character” as well.

On International Human Solidarity Day, let us emphasize the role of human solidarity in building lives of dignity for all on a healthy planet. We must work together to achieve the SDGs and secure the future we want.