Abraham Lincoln was born on February 12, 1809. He served as the 16th President of the United States from March 1861 until his assassination in April 1865. The photos of Abraham Lincoln show a man who was tall and slender.

What did he eat while he led the country through the American Civil War,  ending slavery and promoting economic modernization? 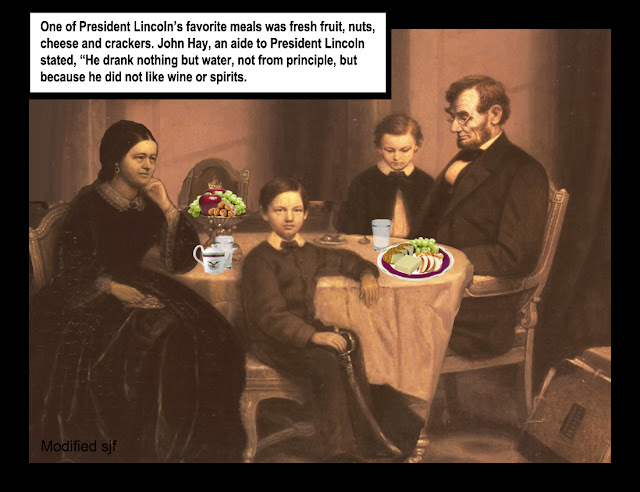 Helen Dupre Bullock, Historian of the National Trust for Historic Preservation, wrote "Authorities agree that Lincoln was indifferent to food, not particularly knowing or caring what was placed before him, whether it was cold or hot, and even whether he ate it or not. If not reminded of meal times he forgot them." Lincoln was usually so preoccupied with problems of politics he gave little thought to food unless faced with it.


In the White House, President Lincoln’s eating habits were irregular. For breakfast, he would have an egg, a piece of toast and coffee, if he remembered to eat. Lunch consisted of “a biscuit, a glass of milk in winter, some fruit or grapes in summer,” wrote John Hay, an aide to President Lincoln. “He drank nothing but water, not from principle, but because he did not like wine or spirits.

President Lincoln was fond of certain foods, especially apples, and Mrs. Lincoln always had plenty of apples available. One of his favorite meals was fresh fruit and nuts, cheese and crackers. Some sources note, President Lincoln did have two favorite dishes, Chicken Fricassee with Biscuits and Oyster Stew. His favorite dessert was Apple Pie. Lincoln's Table, by Donna D. McCreary, contains 125 recipes of foods the Lincolns enjoyed, including flannel cakes (pancakes) and cornbread. The book provides stories about Abraham Lincoln's childhood and background information about many ingredients used in the recipes, as well as photos and menus. The recipes, though historically authentic, have been converted to modern-day measurements.